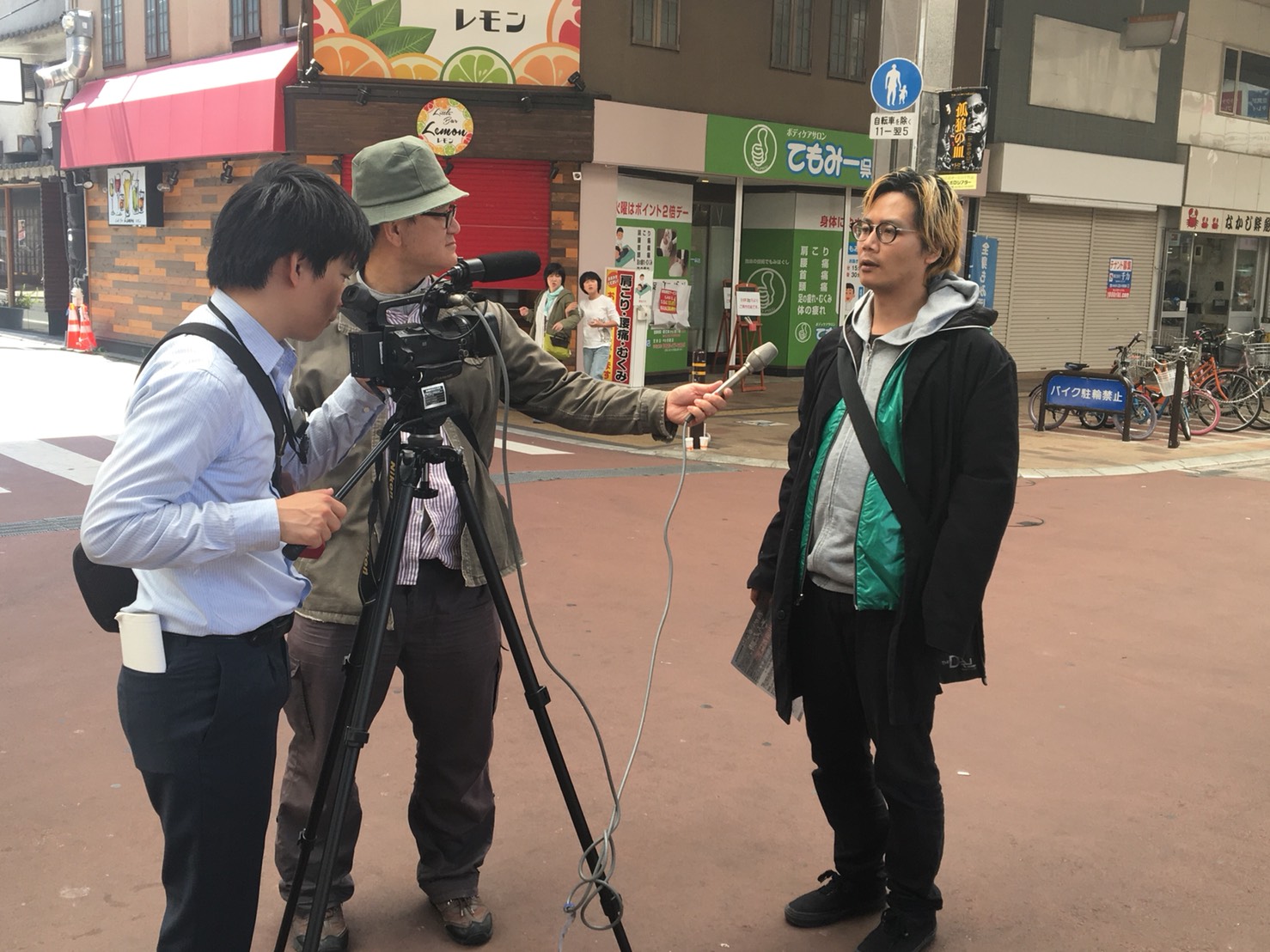 ◎Cast wanted
・Some boys and girls who look 10-12years old
(one of them is a leading part, boy who is half Southeast Asian half Japanese)
・Some men and women who are 20-50years old.
(as a part of a teacher, parents and so on)
・a man who is half Southeast Asian half Japanese around 19years old
・a Filipino woman around 40years old (must speak Japanese)

◎Movie title: “You are here, you were here.”
◎Summary: “If it’s for important person, I don’t care I’m wrong.”
The boy named Kishimoto, he is in the 6th grade in the elementary school. He’s always bullied and teased it’s because he is half Filipino. He can relax just at the library and meets the new librarian Shoko. Sometimes he shows the novel that he’s writing, at other times Shoko makes some tea for him. He tries to pretend to be strong and tells a lie to her that he is a class president.
One day, when Kishimoto dries his shirt that be wetted by his classmates on the rooftop of the school, Kayama comes out from the power room. He is a member of the broadcasting club and always been teasing it’s because his broadcast is eccentric. When he heard Kishimoto’s Filipino, he misunderstood that Kishimoto can speak English. He decided to invite Kishimoto as a “Foreign DJ”.
Kayama takes advantage of Kishimoto’s weakness that he tells a lie to Shoko, and let him make a special broadcast program. With the approach the day they broadcast the special program, Kayama gets along with Shoko, and Kishimoto is jealous of him. Finally, the day before the program, Kayama tells a secret about Shoko that Kishimoto doesn’t know.
◎Period of filming
August 20, 2018-August 31, 2018 *provisional
(probably visiting before shooting)
◎Area
Hiroshima, Kure
◎Application deadline
Monday April 30, 2018 4:00p.m.
◎Audition
Every Saturdays from May 19, 2018 to 3 June, 2018
9:00a.m.-7:00p.m. at Kure, Hiroshima (Detail information will be provided to the successful candidates of the applicant screening.)
◎Selection
The information of a result will be provided after applicant screening with e-mail. If you don’t get any information by Sunday May 13, 2018 7:00p.m., I’m afraid you failed.
I need cooperation, so I release this information as much as possible. For that reason, lots of recruitment will be expected. I’m sorry that I can’t provide the information to fail. Thank you for your understanding.
◎Performance fee
Just a little, but we prepare on the role, operating time and days.
Full compensation for meal during shooting and transport expenses, but please ask us about transport expenses outside the prefecture and accommodation.
◎Application method
name, pictures which were taken within one month(one whole body, one upper body), height, age, the presence or absence of acting experience and that content, contact information (address, phone number and e-mail address), your special skills, hobby and your personality and also about the thing you feel happy and sad recently
If you belong to a talent agency, please write the name of agency and the person in charge.
Please compline in these information and sent us with e-mail or mailing.

◎Destination
E-mail: kimiiru01@gmail.com (*Minors need parental consent.) The subject is “”You are here, you were here.” audition”.
Mailing: Tobi-kyu Program audition 〒737-0045 Daiichi Ishida-biru 4F, 3-5-1 Hondori, Kure-shi, Hiroshima (とび級プログラム オーディション担当 〒737-0045 広島県呉市本通3-5-1第1石田ビル4F)
For an e-mail, please send us as a PDF or JPEG file. And also, the title of the file must be your name, age and the name of your agency.
Please write the preferred date of your audition.

◎About the media
Media: movie
Area: nationwide
Release: Autumn 2019
◎Determined cast
Yuji Yokoyama, as Kishimoto’s father
He is a news caster for RCC Broadcasting. He has 6 TV and radio programs in total, like “KANMURI”, “THE★ YOKOYAMA YUJI show”, RCC radio program “Heisei Radio Variety GOZEN-SAMA SAMA” and so on. In 2015, he won the prize “the 52nd Galaxy award”, it’s to praise the person who contributed to improve broadcasting culture.
◎Production Cooperation
New Cinema Workshop
◎Production
Tobi-kyu Program
◎Director Kosuke Sakoda
Massage from Kosuke Sakoda
Some director said he is awkward to live. He has the power more than others to trust someone but on the other hand, he has the power more than others not to trust, too. Both are in him together, so he is brittle and it is his style as a writer.
I wrote a scenario. There is a boy half Filipino. There is a boy who is made fun by everyone. And those two boys love a woman named Shoko. Three person that awkward to live. I wrote the story about like that three. I wrote who is also awkward to live. The two boys told a lie. And Shoko also has a secret. The two boys told a lie to all over the world to save Shoko. Awkward to live, actually everyone has such a side, and feels weak and painful. I want to tell it and understand each other who watch this movie.
“I tell a lie to all over the world for my important person.” This is perhaps wrong, but this is also to trust to save someone. The three who are in this movie. Could you be an accomplice for them? Could you be an accomplice for everyone who watch this movie and us?

Kosuke Sakoda: He was born in Kure, Hiroshima in 1977. He directed “This window, other side” while he was in the New cinema workshop. His direction that bringing out shaky mid to expressions and the unique sense of images were admired. “Inside of…” the movie he directed after the first one won multiple awards at the home and abroad film festivals. However during preparing the next film, he became depression. After medical treatment for three years, he came back with “Mistress of my dad”. It was got invitation screening by 12 film festivals in 3 countries. And also, he won prizes in Indian and American film festivals. It released at Shinjuku K’s cinema, the seventh art theater in Osaka and Hiroshima Yokogawa cinema. This was an exceptional debut as a medium long movie. He’s been in Kure since 2014.

Yuji Yokoyama (as father of Kishimoto): One day, I was asked to play in the movie by Kosuke sending the scenario. The story was so Kosuke like snuggle up to someone. It was about the boys having tender heart. I was touched my heart. And also he said, “I want to direct you never seen before!” Of course I said “YES!” Why don’t I accept such an exciting offer? I’m looking forward to staring filming. 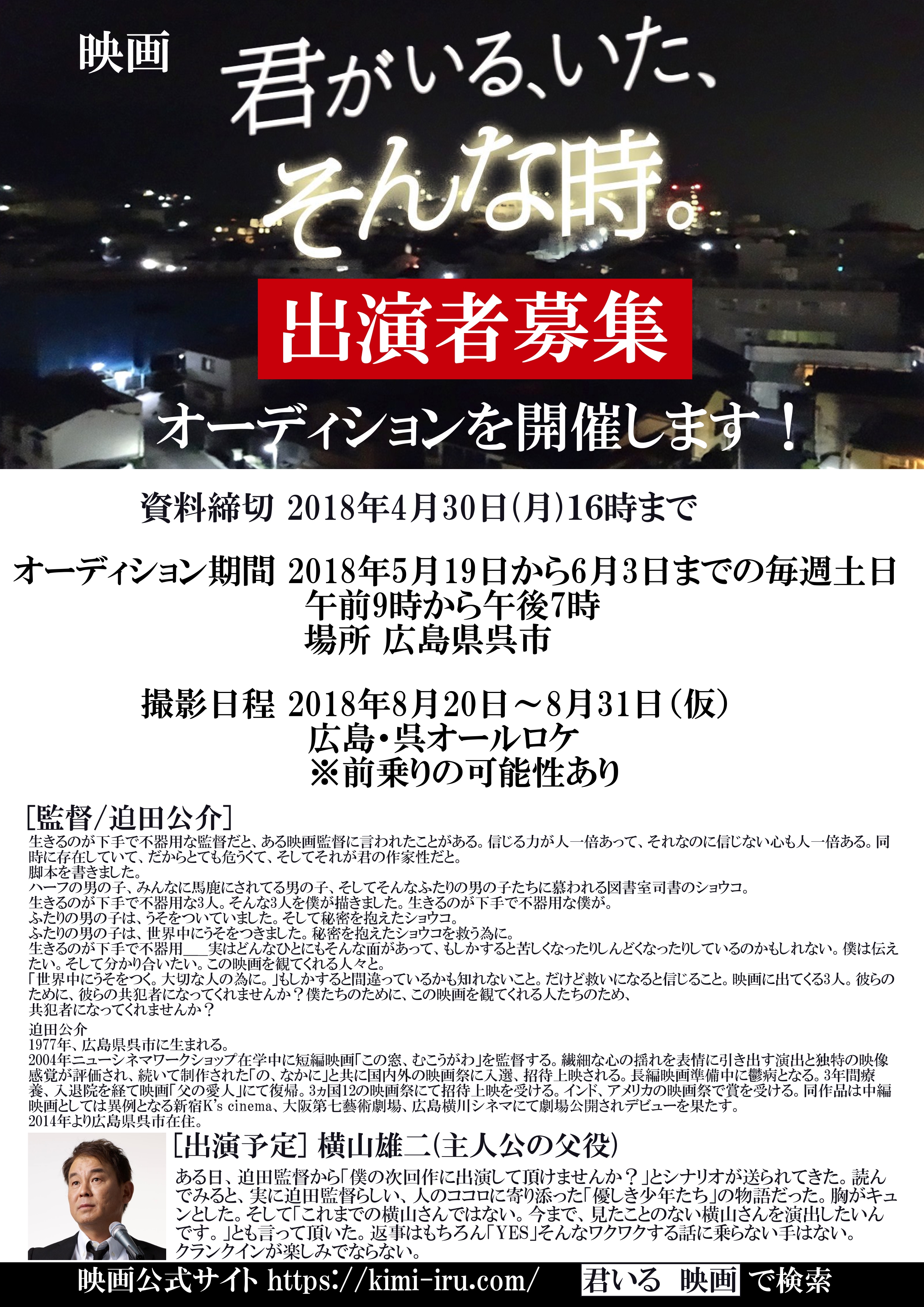